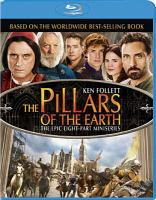 The Pillars of the Earth

I saw this when the novel was fresh in my mind. The t.v. version carries on the tradition started in mid-2000's in Britain of tight budget, great actors, dumbed-down script, wrap it all up with odd camera angles, fuzzy photography, and a few plumes of smoke here and there...done!

I have not read the book (but will borrow it soon!) so I have no comparisons to make. As a miniseries I thought it was quite good and entertaining. The White Ship incident in early English history had significant consequences. Great premise for Follett's story. The story centers around a builder in the 1100s. He aspires to build a great cathedral. Story is interlaced with royal rivalry, political ambitions and church related intrigue--basic medieval setting. There were 8 episodes about 45 minutes each. I thought it was good and entertaining, the construction aspect was interesting. Got a bit soap opera-ish at times with love relations and personal ambitions, but overall good, would be great viewing for a long weekend and you need something long to keep you entertained.

Well, I have no idea what others commenting mean when they say the acting was mediocre - some of the best British actors are in this series, and the entire production was superbly done. Yes, it deviates from the book, but it would have been prohibitive if they had stuck to it faithfully. I just wish they had use the book's ending, though (not giving it away for those who haven't read it!)

Good story, but just like the book this was based off, had too much random sex. I found a lot to be unnecessary and WAY to graphic.

A bit predictable for example, who the witch cursed. Also I thought Jack was creepy when he was being "coy". Maybe it's just because he is a ginger. I did like the Bishop and head priest. Haley Atwell delivers a strong female lead as a duchess turned pauper. I also liked Tom but his story became very tragic.

One of those movies that truly does not come close to how good the book is. The production does not hold a candle to say Game of Thrones or Borgias.

First off, I found the book very compelling and a wonderful, page turning romp through Ken Follet's fertile imagination. I enjoyed looking up details to verify the historical accuracy of his novel and found, as one might expect, a mixed bag from highly accurate to fantasy. I viewed the mini-series directly after reading, so my memory was still freshly imbued with the details of Follet's written word. I expected the worse. Other reviewers point out gross interpretative inaccuracies in the TV drama and I agree that I found myself saying to my very annoyed wife, "that wasn't in the book" or "Hey, they left out a very important detail"...but all in all, as a TV drama, it holds up fairly well and can be entertaining to those who never read the book or by those who did and want to relive the experience. The CGI and sets are very convincing and the overall attention to detail is to be commended. My concerns about book/TV consistency was put aside when I saw (in the special features) that Follet was not only consulted during the production and shooting, but also appeared in a cameo scene. I mean, if he thought the thing worked, then who am I to criticize? At 8 hours, you'll get your fill of a very well made TV miniseries that might disappoint hard core TPOTE readers, but, though not perfect, it nonetheless stands on its own as a very good effort. -Jim

Reasonably well done period piece about the construction of a Cathedral with the new (at the time) tall pillar gothic architecture. Occurs during an unstable political period, the civil war for the throne between King Henry the First's daughter Maude and her cousijn Stephen in the 12th century.

A good deal of the director's att'n seems to have been focussed on making the 12th century settings and action scenes seem true to life, and CGI abounds. Unfortunately, to pay for the CGI apparently they had to skimp on the acting budget, and the performances are for the most part sub-par, but not so bad as to be un- watchable.

Minus: Below average acting and too much CGI. Gratuitious graphic violence and unnecessarily explicit sex scenes.

A medieval period epic with the usual cast of nobles fighting by all means for wealth and power. In the mix were a few moving love stories involving church builders who were caught in those turbulent times. Reminds me of the series Rome.

I've read the novel which was very good. The mini-series keeps sone of the themes from the novel but deviates significantly in the plotting. After awhile I lost interest because of this. Still its a good series with excellent production values.

If you're waiting for Game of Thrones see this in the meantime! The acting, particulary Eddie Redmayne & Matthew Mac lift this to a greater level. Has the usual suspects (evil Cardinal, bad kings, much plotting, good v evil) and the Ridley/Tony Scott touch is evident all the way through. Very highly recommended. Haven't read the book so can't compare.

One of my favourite books turned into one of my least favourite miniseries. A lot was removed from the book, which makes sense since the book was over 1000 pages, but then many unnecessary details were added or changed.

If you have read the book, though, I would not recommend this mini series. They spoiled an amazing plot.

If you like sex scenes and graphic violence (repetative, too), this is for you :(

This mini series was amazing! There were moments that you think things couldn't get any worst but it does. You just want to sit and watch it till the end in one night...and that was exactly what I did. :D I recommend this to everyone!

I did not read the book so perhaps my take on this series is a bit biased. but i absolutely loved this show when it was airing. the time period and the storyline was beautiful. and the characters were so likeable. recommended for those who enjoy the medieval era :)

Highly disappointing. I sat down to watch this movie with high expectations. The acting was mediocre at best. Matthew MacFadyen and Rufus Swell, two good actors, were just mediocre. The big surprise was Donald Sutherland, who is a great actor and seemed quite lost. I wonder if the book is as bad, if it takes so many liberties with History... No longer tempted to read it though. (Update: I tried really hard to read the book, but couldn't stand it...)

I watched the show before reading a book and I loved it! Beautiful!

Liked the book better but this was enjoyable even if it was rather historically inaccurate. I am no King Stephen supporter but from all accounts he was no murderer such as protrayed in this movie. For a more accurate telling of the King Stephen vs. Queen Maud tale, try Sharon K ay Penman's 'When Christ and his Saints Slept'.

Not as good as the book but still retains the essence of the original storyline.